April in Sri Lanka is hot. April in Arugam Bay in Sri Lanka is the hottest. So you might wonder why it was that we decided to undertake a project to build a compost toilet in Arugam Bay in April this year. Well… it was circumstance and timing, serendipity and luck, chance and… in some ways it doesn’t really matter. We did it, that’s what’s important.

People often get a bit alarmed at the prospect of a compost toilet, worrying that it will be smelly, dirty, unsanitary and basically not a very nice experience. But if you do it the right way, keep it dry and maintained, there’s not reason for any of those things. In fact, compared to a stinky, over-flowing septic tank it’s a much nicer experience indeed!

So why build a compost toilet instead of a regular, flushing one? Well, one of the reasons is the extra expense of having to install a septic tank and all the required plumbing. Plus of course, the requirement for a lot of water to keep it flushing. No water, no flush. That’s the rule.

Another reason is that it can actually be a much more environmentally conscious way to deal with human waste. Even if you’re nervous about putting the resulting compost on your vegetable garden, after around eight weeks or so of letting the loo ‘digest’ you are left with nutrient rich compost for your garden, and so the wonderful cycle of life is allowed to continue.

The toilet that we have built at the Rice & Carry ‘cool spot’ at Whisky Point is designed for public use during the busy surf season, which lasts from around April to September. Since Whisky Point is a little bit remote we don’t anticipate an enormous volume of traffic, nevertheless we built a dual chamber design in case over time the use increases to the point where each chamber needs to be cycled through the season. As it is, we anticipate both loos being used throughout the season, and then shutting the system down for the off-season months to compost in time to be emptied before the season starts again. There’s that cycle again for you.

In order to create a decent size compost chamber, and to make the maths easy, we designed everything around 8ft x 4ft sheets, since this is the standard size for plywood sheets, which we hoped would make it easier and cheaper to source materials. 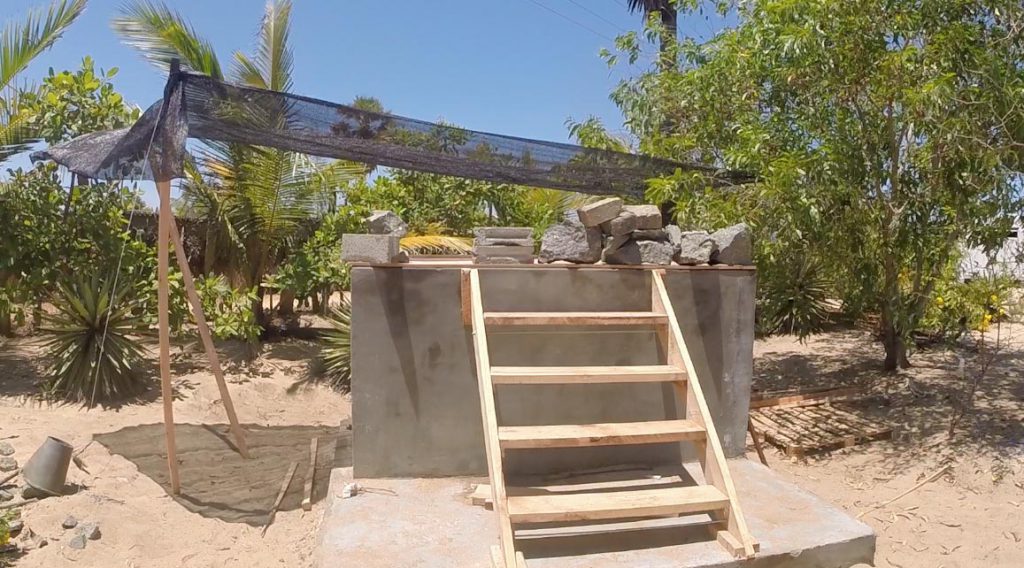 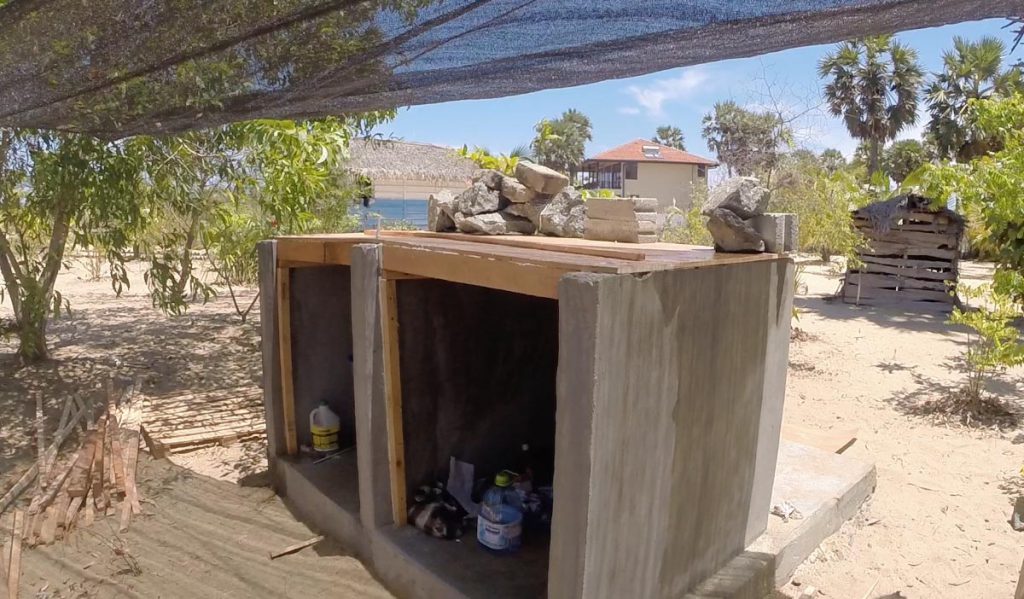 We got a ‘mason baas’ to build the composting chambers since these need to be air-tight and strong enough to support the main structure of the toilet itself. This is, however, the only cement construction needed for the toilet, the rest is all timber and therefore quick, cheap and easy to assemble.

The important thing about the composting chamber is that it needs to be airtight, or at least you need to control the air flow so that you don’t get nasty smells escaping to places where they’re not wanted. We built a wooden frame onto the concrete base, and then used silicon and screws to seal down an 8 x 4 sheet of plywood to create the top of the chamber. Since access is required to empty the compost we made some doors for the rear of the chamber and secured them in place using a castle-gate style beam. We don’t want it to fall open after all. We used a fine metal mesh to create a vent hole in the door in order to encourage air circulation, but discourage flies and insects from finding their way in.

For the toilets themselves we built a wooden framework above the composting chambers, and used a plastic bin to create a ‘pooh chute’ between the seat and the compost chamber. With a good toilet seat to create a seal when closed this should all be fairly smell free. 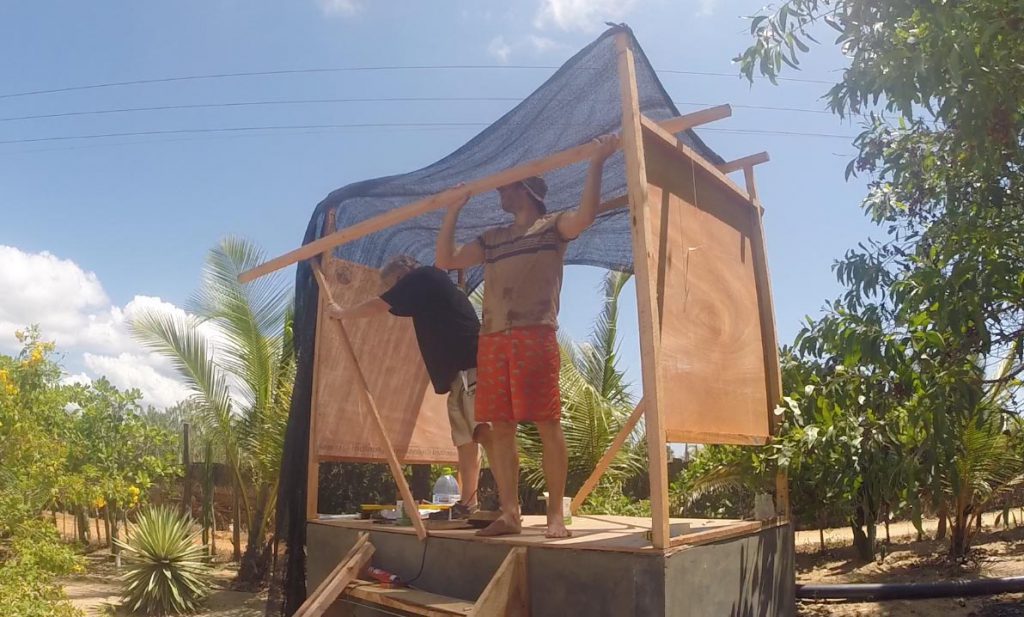 In order to assist the direction of the air flow we used a drain pipe to create a venting chimney, so now the air will flow in through the vent in the chamber door and out through the chimney… not in and around the toilet it self. We put a fly-screen at the bottom of the chimney too, just in case. 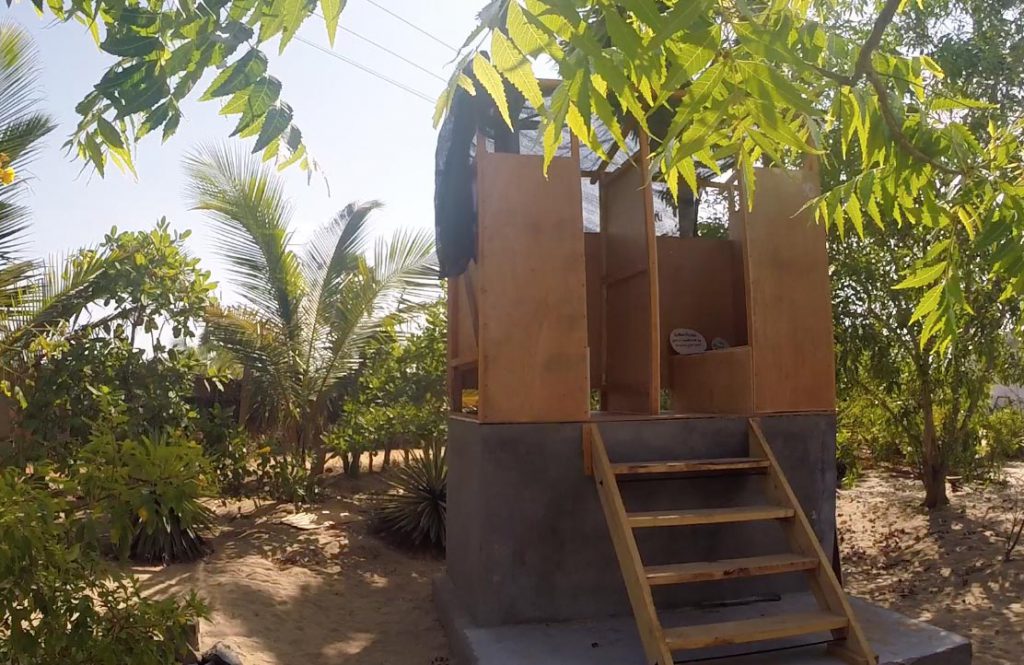 Every compost toilet needs a ‘balancing’ material in order to balance out the nitrogen rich pooh and also absorb any liquid. Generally speaking sawdust is a good choice, but you can also use coconut coir. Thankfully, both materials are in good supply in Arugam Bay.

So if you’re planning on surfing in Arugam Bay this season, get over to Whisky Point, have a chat with the great people at Rice & Carry, grab yourself a cool bag to take home and leave some nutrients behind for the garden 🙂

There’s lots more info on compost toilets on the web, but you can of course start with Wikipedia